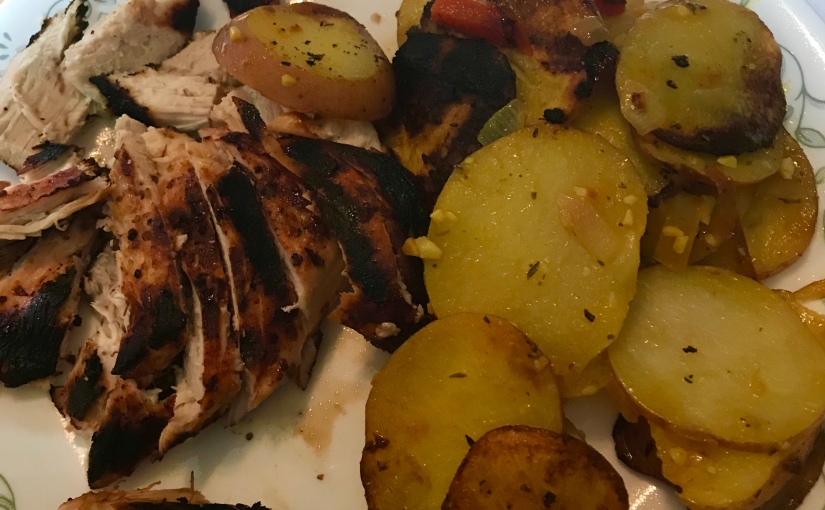 This weekend was a crazy one with my daughter starting gymnastics, my weigh-in and Mother’s Day! I did, however, make time for groceries and meal prep so that I would be prepared for the week ahead. I decided to take a trip to Costco because I hadn’t been in a while and some of my fellow challengers recommended some of their products. I may have gone a bit overboard but it was well worth it lol. I ended up leaving with a giant package of stewing beef, a package of haddock fillets, a package of boneless skinless chicken breasts and a package of lean ground beef already formed into patties for grilling. I was seriously excited for all this meat as it would last me quite a while and was far cheaper than buying it individually at the grocery store. I have already prepped more of the beef & broccoli from last week because it was a huge hit with the entire family, so now we can enjoy that through the week when no one feels like cooking. We pan-fried the haddock for dinner on Sunday night which turned out great and paired well with brown rice and green beans. My favorite meal of the entire weekend though ended up being the bbq honey mustard chicken and my famous potatoes (not ‘world’ famous, but they should be lol). Since it turned out so well, I thought I would share 🙂

The first thing I will mention is about the chicken…… I learned a trick this weekend that I had never heard of previously. Chicken can be a difficult meat to grill depending on the thickness and shape, as well as which meat you are using (breast, thigh etc.). If you are using chicken breast, which this recipe does, you could run into issues with one end of the breast being thicker than the other which can result in the thinner part getting overcooked by the time the thicker part is done. To prevent this, simply put your (fresh or thawed) chicken breasts in a freezer bag and beat with a meat tenderizer if you have one (I don’t so I used a rolling pin instead). The goal is NOT to flatten out the breast, you simply want to try and achieve an even thickness across the whole breast.

Ingredients you will need for this recipe:

Combine the apple cider vinegar, honey, dijon mustard and 1/4 cup of the olive oil in a small bowl and whisk until mixed well. Place chicken pieces in a large freezer bag and add marinade. Carefully squeeze out as much access air as possible and seal. Place in the fridge and allow the chicken to sit in the marinade for at least 30 minutes.

While you are waiting for the chicken, wash potatoes and cut into circular chips (as if you were making scalloped potatoes) about 1/2″ in thickness. Combine cut potatoes, onion, peppers, remaining olive oil, garlic, salt, pepper,  Italian seasoning, and turmeric in a large mixing bowl. Using your hands, mix ingredients together ensuring that potatoes and peppers are coated evenly. Once the mixture is mixed up well, transfer into a foil pack or wrap tightly in foil, ensuring it’s sealed all the way around. Place on a pre-heated at medium-high heat. Turn foil over every 10 minutes to prevent charring on one side. Potatoes should be ready in 30 minutes or so. 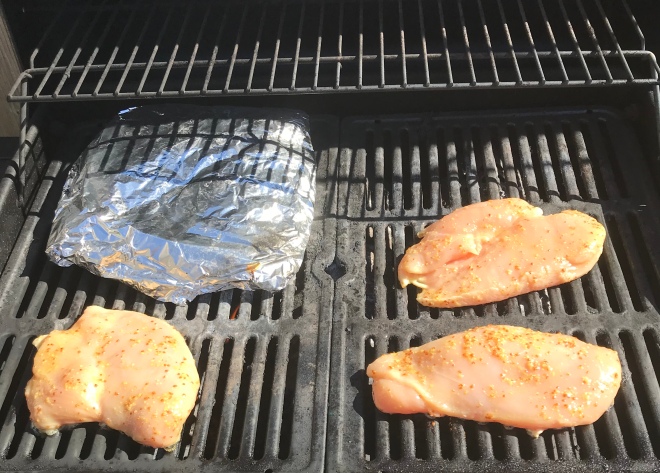 Once potatoes have been on for about 10 minutes or so, take the chicken from marinade bag and place on the grill over medium-high heat until done (grilling times will vary depending on the thickness of the chicken breast, the internal temperature at the thickest part of the meat should read 165°F (74°C). Remove from grill and enjoy!